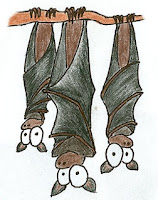 There are these two bats in a cave and one says to the other "I could do with some blood right now." The other one said, "Me too but it's almost sunrise." The first one said, "Wait here." He flies off and comes back with a mouth full of blood. The second bat says, "Hey, where'd ya get that blood from?" The other replies, "Ya see that tree over there?" "Yea" "Well, I didn't!"

If you were to walk across the floor of that bat cave you would leave fluffy foot prints in the guano. You would also hear a crunchy sound from the cockroaches feeding on the guano; spiders and other predators that fed on the cockroaches, beetles that fed on dead bats, and parasites that lived on the insects and the bats.

Right about now you are asking yourself what this very bad bat joke and the reference to extremely disgusting bat guano have to do with Ozark cave lore. Well, it seems that in the 1800's there was a very important use for this guano. During the American Civil War bat doo doo, better know as Salt Peter, was used to make gunpowder for the troops and today it is used in making great fertilizer!

Besides the practical use of Salt Peter, Ozark caves have for centuries been surrounded by a swirl of legends. These legends recall days when desperadoes - such as Jesse James, used Ozark caves to hide from lawmen and from fellow criminals. They have also been used as Indian burial sites, shelter for hunters from storms and yes, by bats. 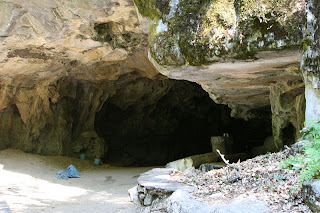 Legends, tall tales and historically accurate accounts have it that Ozark caves still contain hidden caches of treasure left by the Spanish Conquistadors and robbers. Most assuredly they intended to return for their "stash" and it is possible that maps do exist for finding hidden treasure in the Ozark hills.

My Grandfather, Jacob Whitaker Copeland, loved to tell his grandchildren of his own treasure finding adventure as a young man. While on a hunting trip deep in the Ozark woods of Dent County he had to take shelter in a cave from a violent storm. He told us of stumbling on a cache of long narrow silver bars - so many and so heavy he could not imagine getting them home. He had killed a dear that day and had his rifle to carry as well so there was no way he could get home with any of the heavy bars. He decided to head on home with his deer and  come back for the silver.

Through many years of trying, he was never able to find the cave again. He lived in what is now Mark Twain National Forest near Bunker, Missouri. If anyone knows the area they may understand why it would be so difficult to locate the cave again. I will never know if his story is true or if he was repeating local lore to entertain the young grand kids that hung on his every word. I so enjoyed his stories and that was probably his intent all along. 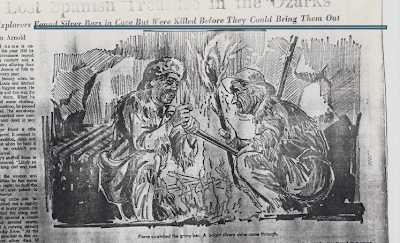 Many years ago one of my older cousins found an article in a St. Louis News Paper entitled "Lost Spanish Treasure in the Ozarks", written by Oren Arnold. The story tells of a man finding long narrow silver bars in a cave "around 100 miles south of St. Louis." The story is not in print today and it is too long to relate it here. In preparing for this post I reread the article and it is intriguing to think Grandpa's story just might be true. However, I'm not getting my metal detector out just yet but will tuck that memory of my grandfather close to my heart where it has lived for many years.

Deb Coley
Thanks for stopping by. I began this blog to share my family tree with others who are researching the same families. I will be including resources that may help you with your own research. Here’s hoping you enjoy your visit, and if you have any questions, or recognize a shared relationship, please feel free to leave a comment.